Friends… Matt Fabbri just can’t stay away, and I love it! He’s guest blogged here before with We All Fall Down, and he and I have co-written twice now. As always, I love picking his brain and comparing his high school reality to my elementary one. Buckle up, you’re in for another post that will hopefully make you just a little uncomfortable and push your thinking! 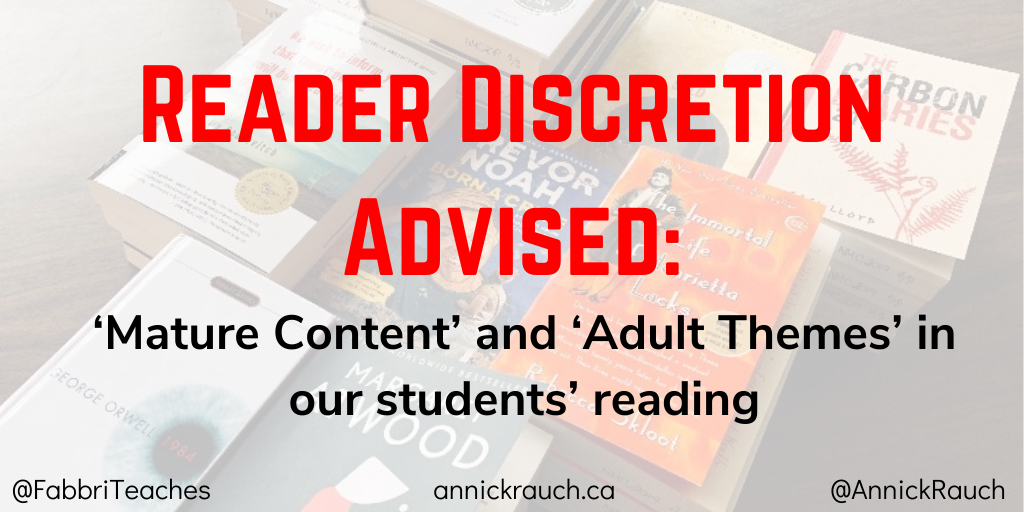 I know by now you know a lot about Annick. So a little about me:

I used to teach English exclusively at a number of “traditional” middle and high schools. Now I teach at Nelson McIntyre Collegiate in Winnipeg. And, though my title is “classroom teacher”, my work allows me to act, instead, as a guide and consultant for my students in their humanities-based PBL (project-based learning) courses called “Canadian Histories” (Grade 11: ELA, History of Canada) and “Global Issues” (Grade 12: ELA, Global Issues).

But regardless of my role, literature, and the practice of reading and sharing about what we read, are essential aspects of my teaching pedagogy. 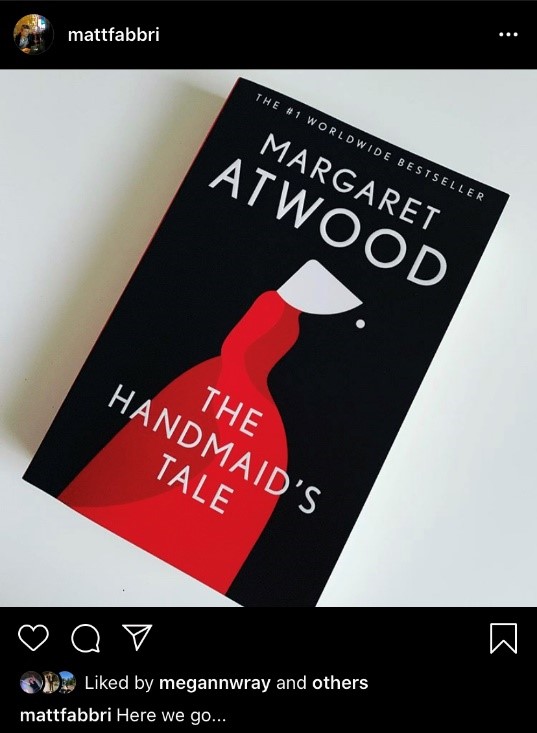 I’m sharing my reading on Insta (@mattfabbri) constantly (annoyingly, and with the hashtag #SomeFabbFallReading) and so, a couple of months ago, it was only natural to post a photo of a book I was reading with the caption “Here we go…” (It was the weekend. I was alone. The “We” was royal. I hadn’t even mentioned my students in the post; but I suppose one just assumes…) The comments and DMs and texts started to trickle in over this book. Some of them read “Oh! I love that book!” and “It changed my life!!”. Another text just read: ATWOOD!!!!!!

But others – the ones that sparked this blog post (the ones I’ve since quietly deleted) – read more like: “your reading THAT?” (Yes, they used the wrong homonym and no capital.) and “Doesn’t that have mature content and adult themes?”

In our society today, that’s code. Code for just one thing.

But we don’t say that. “Sex”. No. Because that’s too assumptive, and, in education, too accusatory. As if we’ve assigned our students the first 5 chapters of Fifty Shades of Grey for the Socratic seminar tomorrow. So, we disguise it.

We don’t talk this way about other books.

No one talks about To Kill a Mockingbird and its use of the n-word, and other racially divisive language more times than I can recall. AND its portrayal of police brutality. AND a racist justice system. AND its ignorance of those living on the outskirts of whatever “normal” is.

Aren’t these issues “mature” and “adult”. Those ain’t gonna be in no Robert Munsch book.

Or how about issues like regicide, revenge, murder, suicide, scorned love, and betrayal. (Them’s all’s just in Hamlet, y’all!)

And yet still, we rave when our sons and daughters are cast in school productions of another of his works like Romeo & Juliet. (I’m so proud of Billy. He gets to be Romeo in the drama production this year. You know Romeo: the player and hopeless 15-year-old romantic who meets 13-year-old Juliet at a party, and he marries her the very next day, stabs her cousin to death for killing his best friend, then sleeps with the 13-year-old and runs from the law. She goes into depression, takes drugs, fakes her death with the help of an egotistical priest. The kids both die by suicide, five days later. I’m just so proud of him! “Greatest love story”, my a**!)

Aren’t those themes mature? Isn’t that content jarringly adult? Requiring rational, critical thinking in processing the narratives and what they might mean for our society? And, more importantly, ourselves?

I know! And it’s great! BUT! It’s amazing how, when we see that the language is heightened, subject matter we gape and baulk at in our students’ reading is suddenly permitted despite its … mature content.

And those pesky adult themes.

But we glorify Lee, and Shakespeare, and Hemingway, and Steinbeck, and Plath, and Shelley, and Vonnegut, and Huxley, and Bradbury, and Orwell (ORWELL! Come on!) as essentials for students to be immersed in.

Because how could you get through high school without them?

As my teaching partner in another school-life would always say: they have to meet Atticus Finch, the greatest hero in American literature. They have to meet Macbeth and experience the fall of the great man.

(And speaking of mature content and adult themes: the Scottish play is BASICALLY a Tarantino movie. So much blood. Bathed in blood. From his nave to his chops. Blood blood blood! Out out damned spot! Behold where stands the usurper’s cursed head! Hello? Have we seen the ending of The Hateful Eight? Same thing.) 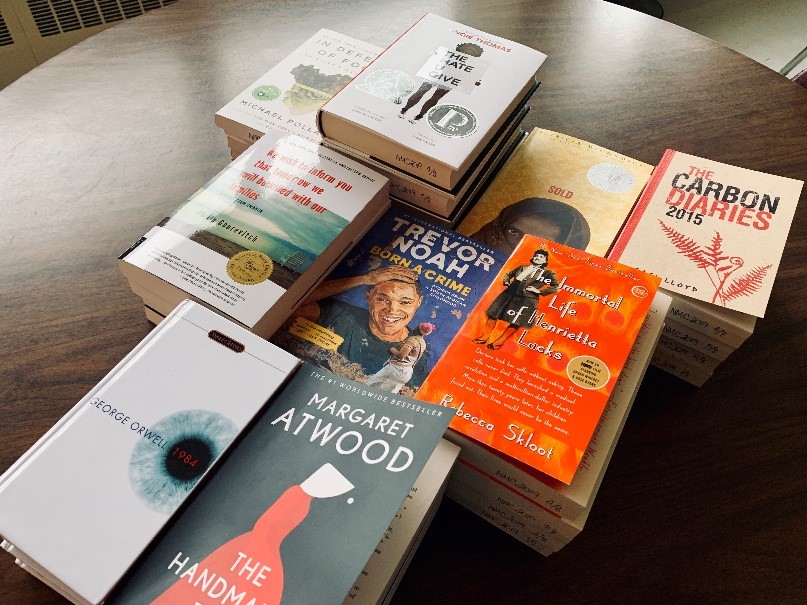 Okay. But despite the obvious hypocrisy by those who object to one literary masterpiece and not the others: look at what our emerging adults are facing in their worlds and the world these days:

It goes on and on.

All of this in a society that changes so quickly that the world they knew in high school will be completely different when they walk across the stage after just 4 years of college.

Actually it doesn’t even come close to what they face when they walk outside of my classroom: their safe space.

Instead, what you can ask – what you *should* ask – is “How are you using it?” “What are you hoping they’ll catch?”

And more importantly “How are you going to tie that in?” 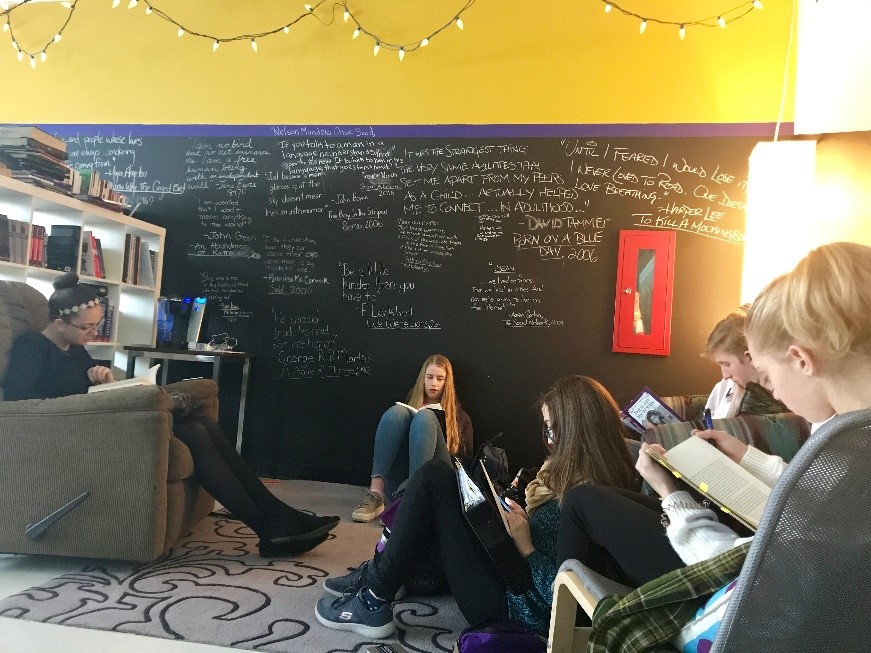 At my school, our students choose what they read. Sometimes it’s an independent novel that they choose for, what I call, “exercise” – reading for fun and enjoyment, and to build reading stamina and establish routines. Other times, they read as part of our class “book clubs”, meeting twice-weekly. The selections are made by us teachers, and then students sign up to read certain ones. And the books, in this case, are all themed. In Grade 11, they’re all books by Indigenous Canadian authors, playwrights, and poets about Indigenous perspectives in Canada. In Grade 12, the themes of the books involve larger umbrella “issues” outlined in our Global Issues curriculum; media issues, gender politics, climate change, consumerism, and the like.

So when I assign reading, I’m not simply quizzing my students of which character said what, or giving them a pop quiz on Chapter 12 just so I have something to mark, or giving them an essay to write about anything in the book because … well, it’s expected.

There’s always something else that I’m asking students to connect to. Some grander theme that is going to resurface later in our application of this content and subject matter. It’s important that they see how the themes of Patricia McCormick’s Sold or Margaret Atwood’s The Handmaid’s Tale or Trevor Noah’s Born a Crime are relevant. It’s critical to their studies. And that those authors’ words lend themselves as crucial instruments to magnify the world as it existed, exists today, and will still exist tomorrow.

It’s important that they meet these characters too.

So, please: don’t come up to me on the street, or in church, don’t text me or reply to my posts and say “I heard that book has mature content and adult themes.”

Because you’ll always get the same response: