Guilt: Feel It to Heal It 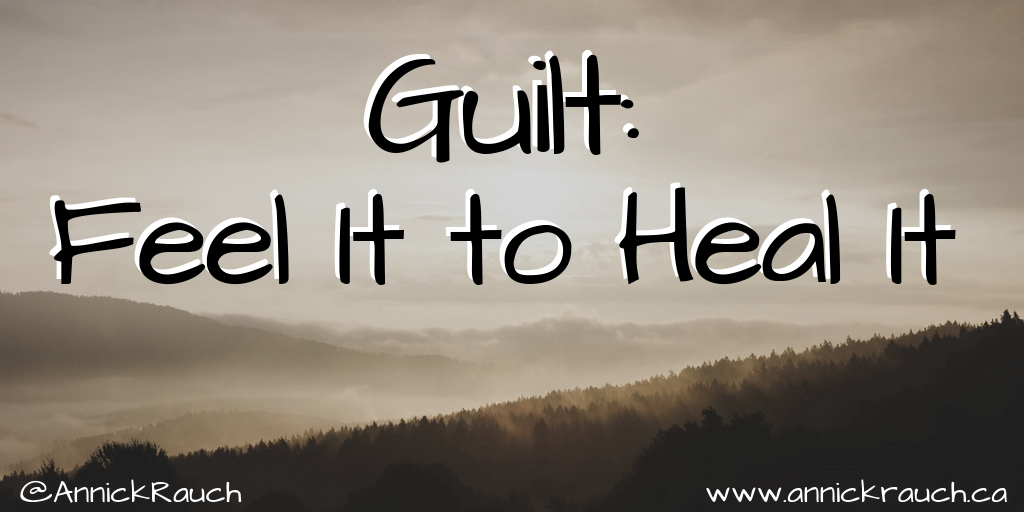 Last week, as I was experiencing some big emotions before the beginning of another school year, I wrote myself a letter, which I shared in my post Dear mama (who is also a teacher). I also did this during another hard moment towards the end of last school year and wrote Dear teacher. Often, writing my feelings and acknowledging them (even if I don’t end up sharing publicly) is enough to help me learn, grow, and let them go to move past them. What has been striking though, which really shouldn’t come as a big surprise, is that both of those posts resonated with many. But of course they would… surely I can’t be the only one feeling those things. Being a teacher is hard! Being a parent is hard! And pretending that everything is always peachy doesn’t do anyone any good.

Something that I’ve been reflecting on a lot is guilt and how hard it is as a teacher and a mom. Guilt overwhelms me on the best of days, never mind the hard ones.

In “Innovate Inside the Box“, Katie Novak shares,

“My auntie Jan once told me, ‘Guilt is a useless emotion.’ So often, we look back on mistakes we have made with regret and guilt as opposed to determining the source of what went wrong and fixing it…

We attend professional development and get nothing out of it and then feel guilty that we took a day away from our students, for what? Subpar coffee and brownies during a five-minute break? Our students all fail a test, or misbehave for the sub, and we feel guilty. Listen to my auntie Jan: Guilt is useless.”

“You guys, mommy guilt is bullshit!

There, I said it. I don’t know if my editor will even let me keep that in here, but if we’re going to hold on to one cussword in this book, Jessica, let it be that line right there!

Mommy guilt, in case you haven’t ever experienced it personally, is this gross, horrendous, cancerous thing that lodges itself in your heart and creeps its way to your head where it festers forever — unless you actively choose to kill it. Mommy guilt likes to remind you on the regular of all the ways you’re failing your children. Some women struggle with guilt on topics like going to work. Others struggle under the weight of guilt associated with everything from wanting time for themselves to not feeding their kids the right kind of blueberries. And I guess, if that was the only thing you had to worry about, maybe it wouldn’t be so bad, but being a mom means there are 967 things to worry about on any given day. So not only are you responsible for someone else’s clothes and shelter and dental hygiene, but you’re also going to go ahead and beat yourself up for those 967 choices you’re making as you’re making them and think that this will empower you to be better next time? No way. This is only going to confuse and overwhelm you and zap you of whatever confidence you had in yourself as a mom, which, let’s be honest, is tenuous on the best of days.”

One thing I mentioned in my latest letter to myself was,

“And that guilt you are feeling? Let it go. It doesn’t do you any good to hold on to it.”

I know what you’re thinking.

Let it go? Ha! Everyone says that… easier said than done! HOW do I let go?!

Trust me, I get it! Guilt is one tough thing to feel and an ever harder feeling to get rid of. I certainly haven’t figured out how to let it go all of the time, but I’ve found that acknowledging the feeling does wonders.

Last week, after my blog post came out, someone very close to me shared a couple of paragraphs with me from the book “Dodging Energy Vampires” by Christiane Northrup. It’s powerful stuff and a pretty fantastic and brilliantly simple way to start getting rid of guilt.

“Yes, putting yourself first can be hard — much harder said than done — but it’s worth it. When you begin to do this, you will feel guilty — guaranteed. When that happens, you must notice the guilt and accept it. This alone takes away some of the power of guilt. I like to do a fun exercise whenever guilt pops up for me. As soon as I feel it, I fully and lovingly say to myself, ‘Nice going! You’re nailing it! No one has ever done guilt better than you’re doing it.’

Believe it or not, completely accepting your guilt will help you release it much faster than hanging on to it and beating yourself up for it. It is when we resist feeling what we’re really feeling that we get stuck. As the saying goes, ‘You’ve got to feel it to heal it.’ And though guilt and shame are incredibly painful feelings, they’re far better felt and released than left smoldering inside.”

For me, writing about my feelings of guilt helps me to acknowledge and let them go. But, when I don’t have time to do this, I will use that positive self-talk exercise. What do you do when guilt creeps in? Because I know it does. I’d love to hear what you’ve discovered works for you.